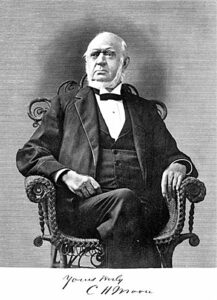 Clifton Haswell Moore was a much more important historical figure than merely the namesake of the C. H. Moore homestead.

Born October 26, 1817 in Kirtland, Ohio, Clifton Moore was the oldest of eight children born to Isaac and Philena Blish Moore. He worked on his father’s farm while attending school at the Painesville Academy and the Western Reserve Teachers’ Seminary, and at the age of sixteen, Moore left home to teach school. While teaching, he began reading law and was admitted to the bar in 1841. In August of that year Moore moved to Clinton, becoming the town’s first resident attorney.

It wasn’t long before he realized that a lawyer in any small county seat could not make more than a decent living by only practicing law, so in 1848 he formed a land speculating partnership with his friend Judge David Davis. The two men poured the majority of their resources into purchasing land throughout the upper Midwest.

Moore became friends with Abraham Lincoln when Lincoln rode the Eighth Judicial Circuit through Dewitt County. When Lincoln ran for president in 1860, Moore is said to have played an important part in securing Lincoln’s nomination. There is no doubt that Moore could have held a prominent political position because of his close association with Lincoln, but declared himself not to be a politician…and never would be. The two remained friends and confidants until the President’s death by an assassin’s bullet in 1865.

It was in the early 1880s when Moore moved to the Homestead, a beautiful Victorian mansion originally built in the 1870’s by his brother-in-law John Bishop. In the 1880’s, Moore added the west wing which featured a two-story library to house his vast collection of books and papers, containing thousands of volumes, among which were many rare and costly editions as well as bound volumes of newspapers. At the time of his death Moore owned approximately 6,000 volumes, estimated to be the largest private collection of books in downstate Illinois to that time.

Before he died, Moore commissioned an architect to design a library for the city of Clinton which was to hold, in part, his enormous collection of books and papers. It would fall to his son-in-law, Congressman Vespasian Warner, however, to complete Moore’s dream. The Vespasian Warner Public Library including the C. H. Moore Rare Book Collection opened in 1908. Today, the library contains over 5,000 volumes from the C. H. Moore personal library.

Moore spent his remaining days at the Homestead until his death in 1901 at the age of 83, leaving a vast estate known as the C. H. Moore Trust Estate.

When the first train passed through DeWitt County in 1854 Moore, having been the railroad attorney for over two years, had been instrumental in securing the right of way and making sure the coveted railway did not bypass Clinton.