By the time the young Clifton Moore arrived in Clinton to become the town’s first resident attorney in 1841, another lawyer by the name of Abraham Lincoln had already established himself as a circuit-riding prairie lawyer in the area, along with other attorneys of the Eighth Judicial Circuit. Lincoln would continue visiting Clinton for another 18 years after that, spending over 100 days and nights in the town, staying in local taverns, hotels, and homes of local residents.

During that time, Moore and Lincoln became associates in the law and close friends, occasionally facing each other in court at the Clinton courthouse, but often partnering in cases on the same side. In fact, it is believed that during his legal career Lincoln partnered more with C. H. Moore than any other DeWitt County attorney.

Moore, a loyal supporter and active promoter of Lincoln’s political endeavors, was heavily involved in one of the future President’s campaign events, a Republican barbecue, with Lincoln as featured speaker. There is also documentation of Lincoln spending the night as a guest in Moore’s large brick rural home (just east of Clinton; now a private residence).

In April of l865, when a shocked DeWitt County learned of the assassination of their beloved President Lincoln, all the churches in Clinton held memorial services for their slain friend and leader. Moore was chosen to speak at the Clinton Presbyterian Church. His eulogy of Lincoln concluded with these words: “in him, next to God, we trusted. Trusted in his honesty that was never tarnished; trusted in his mercy that was only equaled by Him who said, ‘Father forgive them, for they know not what they do’.” 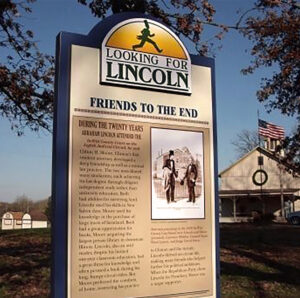 The C. H. Moore Homestead is recognized as one of the official historic sites located within the Abraham Lincoln National Heritage Area.